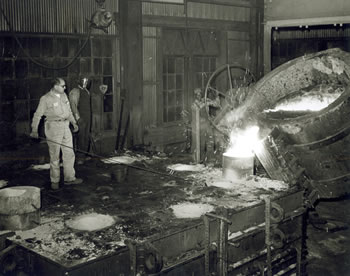 From its early beginning in the late 1800's to the modern facility it is today, SPI/Mobile pulley Works Inc, diversification has been key to growth and success all of these years. It began as an entrepreneur's dream to leave England and start a new life in the American South. When his new venture in the citrus industry fell short of the stable success he desired, Mr. William Edgar arrived in the industrial Mobile and established a foundry.

He began producing items used in area's many lumber camps. Stoves, pans, skillets-items in great demand boosted Edgar Foundry's success, so the company moved to a larger tract property on Ann Street in 1897 where there was room for future expansion. Based on demand, the company began making such items as flat belt pulleys and gears. By 1904 the Edgar Foundry became incorporated as the Mobile Stove and Pulley Manufacturing Company. A period of steady growth followed as the company established itself as a supplier of pulleys, gears and other castings to the timber industry.

It was at this time that the company changed its name to Mobile Pulley and Machine Works to better reflect the diversified and industrial nature of the business. With the advent of WWI, artillery shells were produced, and Mobile Pulley became a major armament supplier to a government at war. But the war soon ended, and the company had to pursue new markets to keep the plant busy.

With the purchase of a war surplus furnace, the plant was able to produce steel, so many new markets opened up, including marine and shipyard castings. Also, it was during the 1920's and the Florida real estate boom when Mobile Pulley bean its long renowned tradition of supplying dredging equipment, such as sheaves, cutter heads, pump parts and ball joints for many of the small dredges in Florida and later to the U.S. Army Corps of Engineers.

When the Great depression hit, the business stayed afloat by adding a diverse product line of cast iron furniture, lighthouse clocks, and industrial type castings to lineup of the more traditional product lines. Later during WWII, the government selected Mobile Pulley to manufacture steam cargo winches and anchor windlasses to supply the shipyards. These products overburdened the existing machine shop, so a new one was constructed on the east side of Ann Street and opened in 1945. It continues to contribute to the company's success.

Mobile Pulley moved into a period in the 1950's where the company was producing equipment almost exclusively for the large paper mill expansion programs in the area. By the late 50's and early 60's, the Corps of Engineers began to turn over more work performed by cutter suction dredges to private industry, reintroducing Mobile Pulley to the dredging field. It remains the primary business of Mobile Pulley today. By 1970 the company was expanding internationally in the European and Middle-Eastern dredging markets.

Leading into one of the most successful periods in the company's history, the steel industry also became a significant Mobile Pulley customer. The company capitalized on the excellent reputation it had developed by then for its dredging equipment. Mobile Pulley's involvement with the dredging activity throughout the world also helped affirm the company's reputation for service, leading to more work in exotic locations abroad. Having the unique ability to design and manufacture complete systems helped the company win some very prestigious contracts. Despite its success in the dredging field, Mobile Pulley has not forgotten its heritage as a foundry and machine shop, and continues to participate in industrial projects as well.

Mobile Pulley and Machine Works hit an all-time low at the beginning of the millennium and was forced into bankruptcy. The facility closed for the first time in 110 years. In 2003 a local company serving the dredging industry, Steel Processors purchased Mobile Pulley. Steel Processors was founded in 1982 by Billy Prine, a former machinist at Mobile Pulley. Soon after the purchase both facilities were combined and began operating at the Mobile Pulley facility.